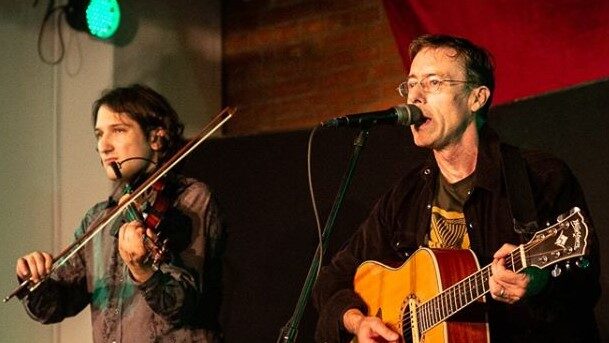 In order to drown out my infant cries my parents resorted to playing records of The St. Peter’s  Ceili Band and Lonnie Donegan. The crying stopped so the records became a nightly routine. My parents were keen ceili-goers and my grandfather was a great singer and melodeon player, so it wasn’t long before I got involved myself. First singing at family parties I then graduated onto the tin whistle, melodeon and finally the button accordion and duly took my place in the local Green Velvet Ceili Band.

Over the years I’ve been through a series of ceili bands, folk-rock bands and  Irish trad groups but there was always a pull from another side. I also played, and sometimes sang, with rock bands, country and bluegrass groups, jazz, western-swing, cajun and blues musicians. When I eventually started to write my own songs these genres influenced me a great deal though there was always something indelibly Irish that remained.

Whilst on the instrumental side I’ve remained firmly rooted in Irish traditional music as a singer I’ve tended to cast my net a bit wider. With songs, I would say it’s the song itself rather than any particular genre which influences my choice. Some songs just feel right when you get into them. Others you can try on for a while and maybe decide it isn’t you. Many of my songs are very old folk songs, mostly from Ireland and Scotland, whilst others are from contemporary songwriters or self-penned. And of course every song has a story to it.

For many years now I´ve been performing with wonderful Czech fiddler, Ondřej Volčík, who is not only a talented musician but also an expert on Czech and Irish music. He also forms the bedrock of The Ceol Flies along with his fellow Dálach members, Adam Smaza and Matuš Smolka.